Anne was one of the strongest follower voices and favorite dance partners of the original Balboa dancers. Anne was born Anna Zorigian in 1922 to an Armenian family in Massachusetts that had come from Turkey in 1913. By 1930 the family had moved to California where her father opened a shoe-repair shop.As a teenager in the late 30s and early 40s, she was known as “one of the five bal gals,” a group of friends who were renowned for dancing (Pure) Balboa at any tempo. (Though she also did “Swing,” — roughly what we’d call Bal-Swing today — and Lindy Hop.) For the modern generation, she was known for her knowledge of the dances and clear memory of the times, giving a great amount to our understanding of Southern California swing dancing — She not only had much to say on the philosophies and mechanics of following and the importance of expressing oneself as a follower, she also had an unrivaled understanding of the leaders of the day. International Balboa and Lindy Hop instructor Nick Williams says she could show him how all the different basics of the great leaders she danced with felt. She thought it was important for every follower to have a voice, and every dancer to have individuality. Above all of this she was a strong, supportive, and independent woman, especially considering the time and place she grew up in. At age 18, she already had a job as a stenographer, and later in life worked at USC where she was an active board member of the school of music.  Thank you to Author Bobby White; Visit https://swungover.com for full article. 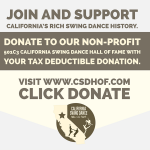 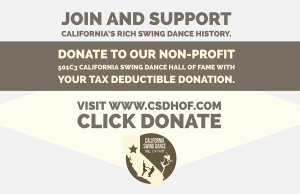